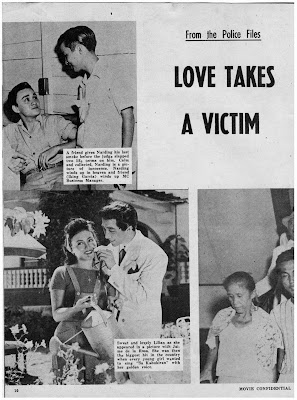 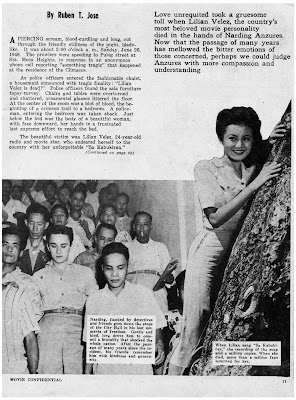 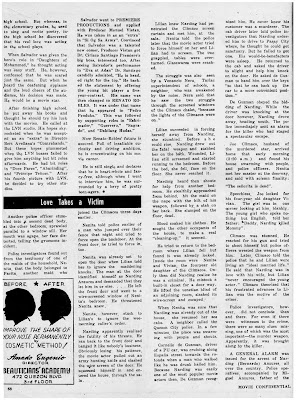 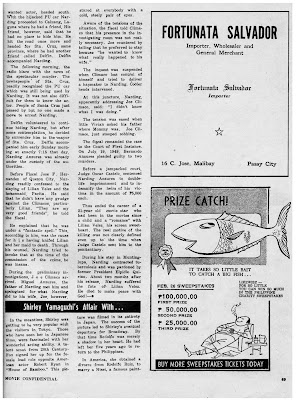 Lilian Velez (March 3, 1924- June 26, 1948), a popular movie star in the 40s, first came into the limelight when she won an amateur radio singing contest in the mid 30s. Prior to the outbreak of World War II, her singing career thrived, and she popularized one of her father's songs, Sa Kabukiran. Velez also won the heart of Jose 'Joe' Climaco, the radio station manager which had sponsored the contest. They were soon married in 1942 and had one daughter, Vivian. 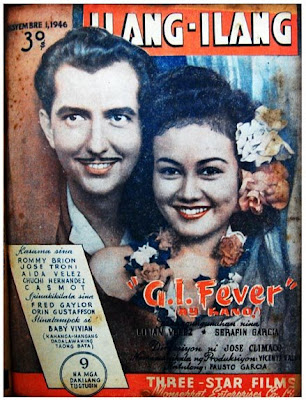 Ilang-Ilang/ December 1, 1946
After the war, Velez resumed her acting career. She joined LVN Pictures, and with her husband as director, starred in such films as G.I. Fever, Binibiro Lamang Kita, Ang Estudyante, and Sa Kabukiran, inspired by the song that had earlier earned her fame. Her leading man in some of these films was Bernardo “Narding” Anzures, a former child actor, and son of actor Miguel Anzures and actress Rosa Aguirre. 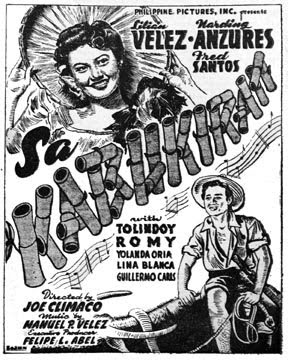 After the success of Sa Kabukiran, LVN Pictures decided to cast Jaime de la Rosa as Velez's leading man in her next film. The decision caused distress on the part of Anzures, who had seemingly become obsessed with the married Velez.
On the night of June 26, 1948, Anzures paid an unexpected visit to the Quezon City home of Velez. Upon his arrival, he stabbed Velez to death and a housemaid who had come to her mistress's assistance. The crime was committed within view of Velez's toddler-daughter, who was unharmed during the incident. Anzures was promptly arrested, tried and convicted for the murders. During his stay in Muntinglupa, Narding contracted tuberculosis and was later pardoned by then President Elpidio Quirino. About two months after his release, he died; his exact motives for the murder were never fully determined.

In 1995, the murder of Lilian Velez was the subject of a controversial film directed by Carlo J. Caparas. Topbilled by Cuneta as Velez and Cesar Montano as Anzures, the film was one of the series of true-to-life, crime and massacre films produced and directed by Caparas in the early 90s.

simon,thanks for the memory. is that the little girl vivian. the actress vivian velez?

Simon,
Just a little bit out of my time, but I heard bits and pieces of this murder, but not the complete story, until now. Thanks.
Rod

Yes, saw the old pictures at ebay, James. I know the seller personally. Kamusta na? Just arrived from US two weeks ago.

Thanks veroli. I was so grateful to Carlo for making a movie about my gandma but he stole a lot of priceless pictures of her from my mom. Not commercial pictures but personal family pictures. He said he would borrow them for the movie but never returned them. These are my mom's only remembrance of her mom Lilian. I have no respect for Carlo J Caparas.

Sorry. Copy and pasted! Thanks Video 48.

hi! im looking for old posters of my Lola when she was an actress. most of her movies we're cebuano but she did some with gloria romero i think. i hope you can find one :) her screen name was Naty Reyes

Hi, everybody, I was just browsing through the internet when I saw this link concerning the late actress Lilian Velez of the 1940s, and I was quite amused. No, I am not the sexy "bomba" actress, Vivian Velez. I think her real family name is Rodriguez (but I'm not sure). I am Vivian, the 4-year-old daughter left behind when Narding murdered my mother. Dona Sisang of LVN tried to get my dad to allow me to become a child star but he wanted to shield me from show business and whisked me off to Cebu with my Lola. I appeared in bit parts of some movies, including "Salamat Sa Loto" with Boots Anson Roa. My only real acting experience was by appearing in major roles in school plays - although acting is in my blood. I guess it was not God's plan for me, and I thank Him for taking care of me. I am an English teacher: 10 years in an international school in Japan, 27 years in Xavier School, in Greenhills, and now, way past my retirement years, I have been invited to teach at The Learning Tree in Teacher's Village. I invite you to be my friend on facebook so we can get to know each other better. Just type my name Vivian Climaco Ocampo ( I married Mr. Ocampo in Japan). If anyone knows if my fvorite movie of my Mom can be found, please tell me. The title is "GI Fever" - nakakatawa talaga, with Bayani Casimiro and my Mom's sister, Aida, in supporting roles. Hope to hear from any of you who are in this conversation!

Hello Teacher Vivian! I was your student in Xavier School batch 90'. I could not forget you because you are my favorite teacher. For the longest time I was waiting for an opportunity to express my gratitude for all the love, patience, and hard work that you have instilled to our class. You are the best teacher ever and I am undoubtedly just one of the limitless students whose lives you have touched. Your dedication has resonated a positive outlook towards education and learning.

I stumbled into you and this blog after watching Lilian Velez story in Cinema One and was totally speechless with what you shared. I respect you Ma'am even more.

God has his ways and may this be my chance to say Thank You.
Hope you are still following this blog. If not I will try to reach you on facebook.

If time permits, I would like to drop by The Learning Tree just to say Hi and hope somehow you still remember me.

From Wikipedia, the free encyclopedia
José Clímaco (1924-1985) was a Filipino film director.

As a budding composer and director, Climaco spent part of the 1930s studying filmmaking in Hollywood. Upon his return to Manila, he became the manager of a radio station. He met his wife, Lilian Velez, when she won first place in a singing contest sponsored by his station. They were married in 1942 and they had one child.

Climaco joined LVN Pictures as a director after the war. He directed his wife in her film debut, and in several films afterwards which she had starred in with her leading man, the former child actor Narding Anzures. Perhaps the most famous film he made with Velez was Ang Kabukiran, a film inspired by a song composed by his father-in-law and popularized by his wife.

In 1948, Velez was murdered by her co-star Anzures, an event that shocked Manila. Climaco remained with LVN Pictures and soon resumed his filmmaking career. He directed films for LVN until the late 1950s. Among his other films for LVN include Parola, starring Jaime de la Rosa and Norma Blancaflor. Climaco would also indulge in cameo appearances in his own films.