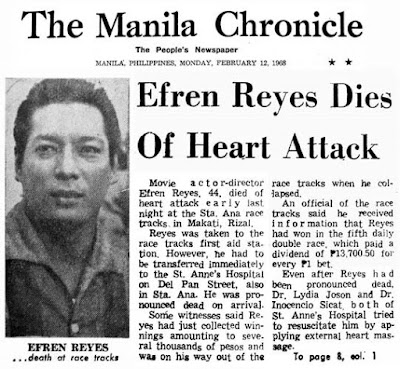 Movie actor-director Efren Reyes, 44, died of heart attack early last night at the Sta. Ana race tracks in , Rizal. Reyes was taken to the race tracks first aid station. However, he had to be transferred immediately to the Anne’s Hospital on , also in Sta. Ana. He was pronounced dead on arrival. Some witnesses said Reyes had just collected winnings amounting to several thousands of pesos and was on his way out of the race tracks when he collapsed.

An official of the race tracks said he received information that Reyes had won in the fifth daily double race, which paid a dividend of php 13,700.50 for every php1 bet. Even after Reyes had been pronounced dead, Dr. Lydia Joson and Dr. Inocencio Sicat, both of Anne’s Hospital tried to resuscitate him by applying external heart massage. At about 9 pm, Reyes’ body was taken to the Funeraria Quiogue on .

It was his third stroke since two years ago. Reyes was with actor Leroy Salvador and other friends.

Reyes was married to the former Virginia Melevo, popularly known in movie circles as Virginia Montes, by whom he had five children, the eldest being 15 years old. At the time of his death, he was directing a picture titled “Jingy” with Andy Poe, brother of Fernando Poe, Jr. in the starring role. 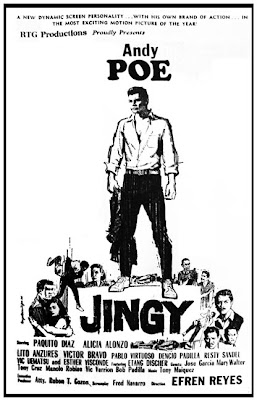 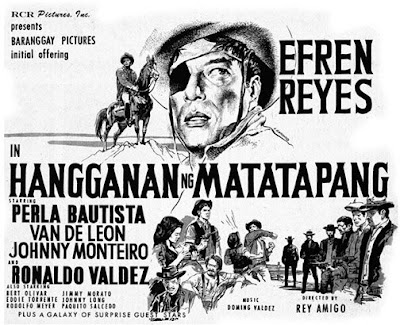 As 5 year old in 1960 I was entharalled when I first saw ESKRIMADOR on TV at my lola's living room. That 15 min fight scene remains the most memorable even after watching so many years swash-buckling films from Errol Flyn to Johhny Depp, I just thought that I should have a copy of ESKRIMADOR. Kindly let me know if you sell or rent out a copy this classic Pinoy film. Thank you.