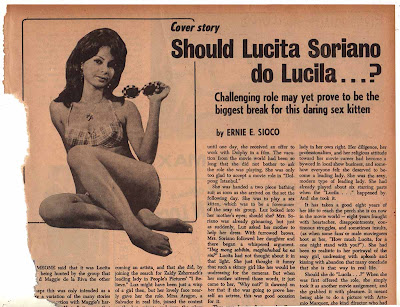 In 1967, moviedom's sex siren Lucita Soriano was in the midst of controversy when she agreed to make Lucila, Ako Laban sa Lipunan. Many people were in the opinion that she should not have accepted the role, considering the private life of the girl obviously alluded. Others say that it was in bad taste, and others were worried for Lucita’s safety. Still others say that Lucita might actually find herself another Lalu, in many pieces. A morbid thought, indeed, but even Lucita Soriano herself was worried. She too had sleepless nights over her decision which was made at the snap of a finger. Should Lucita Soriano do Lucila…?
Yes, Lucita did the movie and Director Artemio Marquez was able to finish it in a record four shooting days. Since the movie was based on a sensational murder news story and public opinion had been so high, the Censors stepped in to ease up the tension. It was shown nevertheless, with minor revision in the movie ads layout--- Lucila was replaced with Lucita.
See Lucila Lalu Case 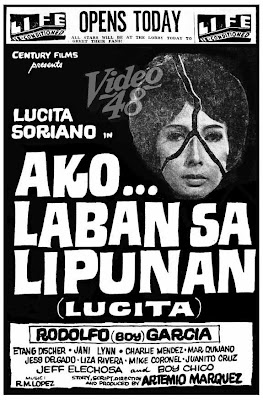 Hey, nice blog!
I just subscribed to the feed.
Keep up the good work.
All the best!

She is the mother of two sons wife of the late Rodolfo "Boy"Garcia now based in Sacramento CA and remarried to American preacher soon to be moved to Austin TX to live with his son Gary Boy Garcia a realtor and a businessman now a married man and a family. Thanks! From:Wayne