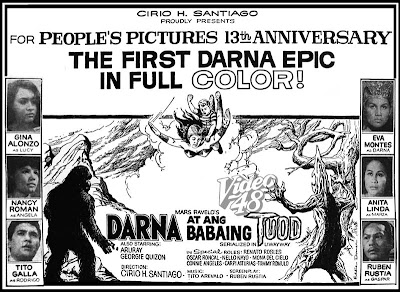 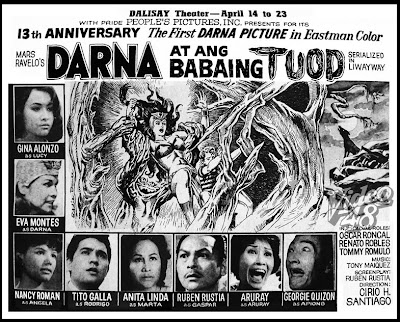 Based from the popular komiks serial novel by Mars Ravelo, Darna at ang Babaeng Tuod, tells of a childless couple, Gaspar (Ruben Rustia) and Marta (Anita Linda), whose endless wish of having a child is finally granted. However, Marta bears a lifeless baby resembling a doll. Marta, in desperation, asks for Satan’s help to give life to her dead child. Her wish is granted on a condition that when the child reaches the age of 18, he will take her, body and soul (see clip below). The child is named Lucy (Gina Alonzo). Soon afterward, the couple is blessed with another baby girl named Angela (Nancy Roman).

Lucy and Angela grow up to be extremely different in their personalities and traits--- Lucy, a disobedient and uncaring person as opposed to Angela, a very religious, loving and caring. Lucy, being a creation of the devil, violates practically all the laws of decency. Men and women are her toys, breaking their hearts, hurting their feelings. She even tries to steal and seduce Angela’s boyfriend, Rodrigo (Tito Galla). Her evil doings reach its height when Satan appears and turns Lucy into a wicked tree stump preying and killing innocent human lives.

It is at this point that Darna (Eva Montes) steps in and battles Lucy to the end. (see clip below)--- 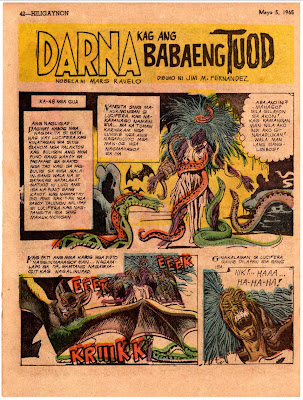 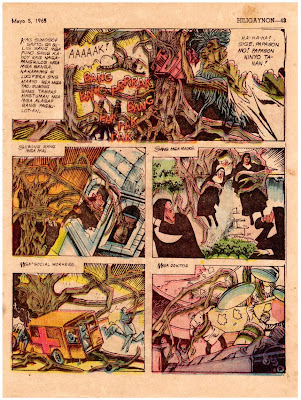 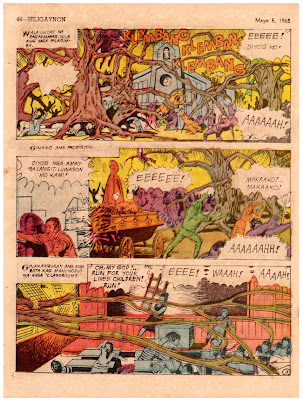 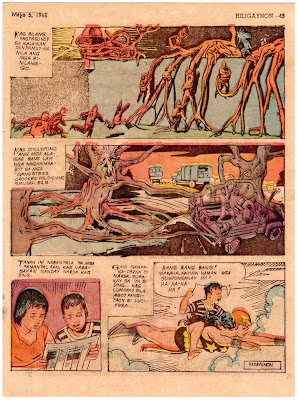 Hiligaynon Magazine/ 1965
(From the collection of Steve Santos)

The boy who played Ding was not credited. I wonder who he was. The first Darna in Eastman color, yet it looked as if it was just tinted. Looking at Eva Montes' flying scenes, I can say for sure that the trick shots of Anak ng Bulkan by Abelardo and the original DARNA were much better than this one which was made in 1965!

The Taong tuod looked so cheezy indeed. Now with digital filmmaking, this sort of scenes would be a piece of cake to do.

Again, deus ex machina delivered Gina Alonzo from evil. I'm really surprised how Cirio Santiago, who was quite adept with action films, did a very tame action scenes here. The finale encounter between Darna and Lucy was rather lackluster, as if it was executed by a director who was not comfortable with action scenes.

JM, I share the same reactions when I saw the movie. The action scenes, in particular, were so amateurish and sloppy. However, it’s fun watching veterans Anita Linda and Ruben Rustia in several tense and emotional scenes. Probably, their performances somehow compensate the movie’s shortcomings.

Dexter, I think Francisco Cruz ang name ng actor na gumanap na pari. He usually played the role of a priest or a farmer in the many movies he made; Georgie Quizon had passed away several years ago, he was sideswiped by a bus at EDSA. I don’t know of Aruray; Yes, Tito Galla is the brother of Gloria Romero.

Still worth watching -- if not for the nostalgic pull then for the earnest performances. Too bad there seem to be no extant copies of Lipad Darna Lipad. Would love to see that!

I was pretty disappointed that they went SO faithful with this adaptation, that Darna is barely even in it! The least they could do is maybe working Narda in as an observer in more scenes than she was in.. I mean, its a Darna movie, yet, Darna herself is only in it for about seven minutes..