"1967: FADE IN--- Two movie sex sirens cast dagger eyes at each other. One mumbles words which are apparently not greetings. The other who arrived late with her husband retorts with choice expletives. One approaches the other. More hot words fly. Then it happens. In a flash, the sexpots are at it. One claws the other; the other struggles, kicks and fights like mad. Minutes later, the battleground is a bloody mess. Worse, blood flows. A broken coffee cup inflicts the wound, and the face of one sexpot is certainly not her fan’s delight. FADE OUT.
After that action scene, nobody shouted “Cut!” The fight, the movie personalities involved notwithstanding, was no mock battle. Neither was ketchup used. The blood, like the fight itself, was real, as the contusions and the bruises each protagonist suffered, and shocking as the headlines that followed.
The two feuding sex sirens: Lucita Soriano and Stella Suarez."
Source: Screen Stardom/ 1967

Of course, there's two sides of the story. As they say --- "It's my word against yours." Who's telling the truth? Read the full text below and be the judge. 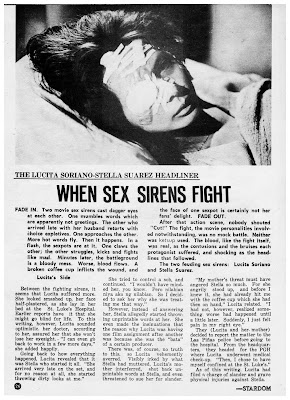 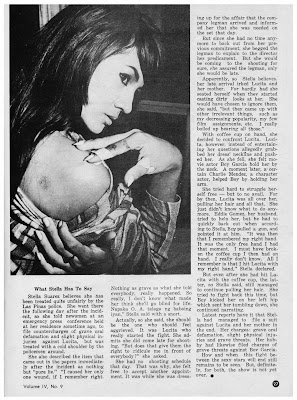