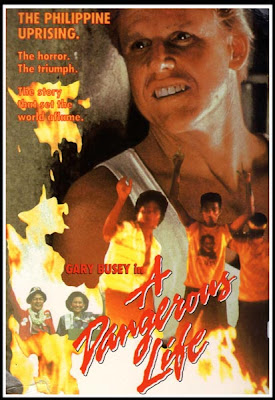 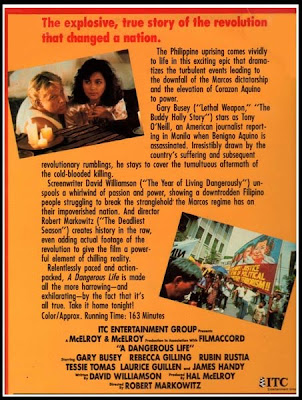 In 1988, a docu-drama TV-movie was made chronicling the events leading to the 1986 EDSA People’s Power Revolution. It was originally released as a six-hour HBO mini-series in the . It was later edited to 162-minute television movie. It was released in home video and was made available in the in Laser Disc format. The movie, “A Dangerous Life,” directed by Robert Markowitz, starred a miscast Gary Busey in the role of an American journalist, Tony O’Neil, covering the last years of the Marcos regime. It starts in August 21, 1983 when Senator Benigno Aquino was assassinated and ends in February 25, 1986 when the Marcoses fled the country and installed Corazon Aquino to power. What could have been a relatively good movie turned out to be a disaster in some parts--- a ridiculous and funny retelling of some important and momentous events. Some scenes were filmed in Sri Lanka when then Defense Secretary Juan Ponce Enrile and the government ordered the producers out of the country for taking liberties with the truth. It’s funny seeing Sri Lankans as Filipinos in the EDSA uprising. Another scene with Imelda (played by Tessie Tomas) singing on the plane to ?

What glued me watching this two-and-a-half movie are the performances of some of our Filipino talents, particularly veteran actor Ruben Rustia as Ferdinand Marcos, Tessie Tomas as Imelda Marcos and Laurice Guillen as Cory Aquino. Other local talents include Dina Bonnevie, Johnny Delgado, Roy Alvarez, Rolando Tinio, Joonee Gamboa, Rez Cortez, Vic Diaz and many more.

There are some good scenes but one of the best parts of the movie worth mentioning was when Ruben Rustia as Marcos, felt betrayed, disappointed and frustrated, being told by the US government to "cut clean and leave." The whole Marcos household was in total disarray and you'll feel the Marcoses'anguish and agony losing grip of the power they held for 20 long years.

This movie tried to imitate Peter Weir's directorial work of CJ Coch's novel: THE YEAR OF LIVING DANGEROUSLY – the turmoil in Sukarno's Indonesia.

A DANGEROUS LIFE could have had its own identity if the filmmakers stayed away from using the character of Gary Busey (a shameless imitation of the Mel Gibson's character in so many ways in The Year of Living Dangerously).

While I was watching this TV-MOVIE of the week (was never released in theaters in north America, only for TV), I couldn't help myself not to be reminded by its brilliant predecessor. This one is an out and out copycat.

The funniest thing is: Cory Aquino refused to let the crew shoot the EDSA crowd scenes in Manila, so the filmmakers went to Shrilangka to do Monalisa's scenes.

It was so glaring, that Monalisa was the only one who looked meztisa in the scene. The crowd surrounding her who were doing the "Cory! Cory!" mantra and hand signal, were all so dark skinned (so the brown, good-looking pinoys were suddenly transformed into very, very dark skinned people and it just ruined the whole film)! At this point, I just had to laugh like hell. It was just extremely cheesy.

What's more: Gary Busey! Sheesh. Not even close to Mel Gibson's charisma and acting ability. Dina Bonevie, however, was excellent, but her talent is not enough to save Gary Busey's lame acting ability.

The whole film, I must say, is a big disaster.

Tessie Tomas, as always, is very good here. The only problem with her is that many north American viewrs didn't know her, and since she didn't look like Imelda Marcos, many got confused (I watched this with some Canadian, French and Aussies friends). I had to tell them that Tomas was playing the role of Imelda. That was also the time when Sharon Stone was signed by MGM to play Imelda Marcos in a project called IMELDA MARCOS (it fizzled), and the publicity about the film made a lot of people expect someone like her to play the character. When they see Tessie Tomas (who was really young that time as Imelda, while Ruben Rustia was too old as Marcos), I was just not convinced by the casting, and not surprising why it confused many viewers.

i do remember ABS-CBN showing this movie as well--i think it was sometime in 1988, as one of their special programs to mark their first day of full satellite transmission...

Never saw this at all. Maski sa Pirata. Why so hard to find?
LIVING DANGEROUSLY, was excellent though.

i got a copy of this film via amazon.com it was a vhs copy that i transferred to dvd.

cool canadian's critic was good but nevertheless when this was shown in hbo it became a good showcase for stellar performances of tessie tomas, laurice guillen, roy alvarez,johnny delgado,ruben rystia,rez cortez and dina bonnevie.

This was shown as an 8-hour mini-series in HBO before it was edited down to more than 2 hours for video release.

I wonder if the complete 8-hour miniseries is available somewhere. THAT I'd like to see.

The true to life story film was based from the events of the assasination of Benigno Aquino Jr and the leadership of Pres.Ferdinand Marcos during the days of 1983 to the downfall of the dictator by the hands of rebel soldiers defectors and opponents takes over and a widow of Sen.Ninoy Aquino led by Corazon Aquino(1933-2009) she is the First Lady of the opposition to lead
the Filipino people and reinstated democracy unity and freedom of the Philippines and becomes the president of the Philippines(1986-92) died in August 1 2009 of cancer and remains a political icons of the 20th century of all time.thanks.From:Wayne