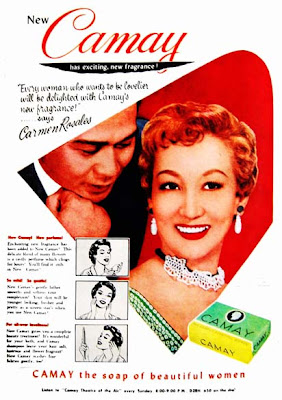 I was inspired to post this entry on Carmen Rosales upon reading a lengthy article on the actress by Jose Mari Lee titled “The Magic of Carmen Rosales” on his blog. He unravel the mystery and magic of Carmen Rosales --- “she was such a consummated actress, a singer, a dancer, but most of all, she was a master of improvisation and mime, a rara avis in the Philippine movie industry.” 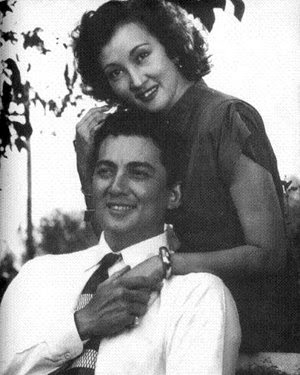 Did you know that in 1939 Carmen Rosales ( March 3, 1917- December 11, 1991) was turned down when she applied for an acting job at LVN Pictures? “No Profile” was the answer. But Excelsior Production took her in and was given a big break in the movie Arimunding-Munding (1939) under Tor Villano direction. She soon became the toast of the local entertainment world. 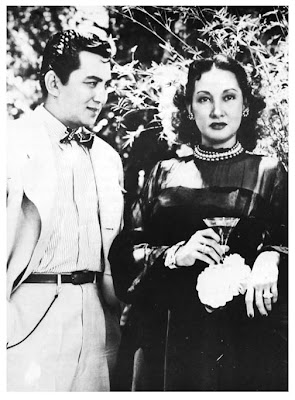 In 1949, LVN Pictures, the film outfit which rejected Rosales for having “No Profile” offered her a staggering Php 40,000 to star in a movie, Kampanang Ginto, a romantic story about a novelist and a singer. The amount was said to be the highest ever paid to a local female star for a single picture. Of course, she accepted the offer. 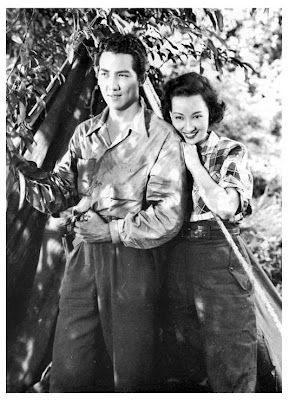 Rosales was already a big star in the pre-war era but her career further blossomed during the post-war period, from 1946 to 1949 where great majority of her film successes were made --- Guerilyera (1946), Kaaway ng Bayan (1946), Si, Si Señorita (1947), Mameng, Iniibig Kita (1947), Hindi Kita Malimot (1948), Simpatika (1949), Kampanang Ginto (1949), Kaaway ng Diyos (1949), Batalyon XIII (1949), among others.
Her screen tandem with then matinee idol Rogelio de la Rosa, is considered one of the greatest ‘love teams’ in the history of Philippine movies. They did more than a dozen movies starting with Takipsilim in 1939 to in 1956. They were best remembered in the 1954 movie, Maalaala Mo Kaya, which broke all box-office records that time.
She won her first and only acting trophy, the 1953 Famas Best Actress for the movie, Inspirasiyon.
Rosales’ star started to fade in the late 50s until her retirement in mid 60s when younger stars, like Susan Roces and Amalia Fuentes, started to rise. However, her name was still on top of the billing.

Carmen Rosales- Rogelio de la Rosa screen tandem:
1939- Takipsilim
1940- Señorita1940- Lambingan1940- Diwa ng Awit1940- Colegiala
1941- Panambitan1941- Tampuhan
1949- Kampanang Ginto1949- Camelia
1954- Maalaala Mo Kaya
1955- Ang Tangi Kong Pag-ibig
1955- Iyung-Iyo
1956-
Another trivia:
Did you know that Carmen Rosales was a guerrilla fighter during World War II? In a magazine article by Ceres Doyo, Rene Navales (eldest son of Carmen Rosales) claimed that “my mother‘s underground work took her to , Laguna, where she was involved in the killing of a makapili (Japanese collaborator). She later fled to Silang, to evade capture by the Japanese. My mother was a sharpshooter who toted a .45 and sometimes wore a moustache in order to disguise herself…” “Carmen Rosales was taken to Pangasinan by an enamoured Japanese colonel named Yamamoto who wanted her to star in a propaganda movie--- or else he would kill Filipinos. Rosales gave in but the film was never finished because American troops arrived. For her act of sacrifice to save a community, the popular star earned the people’s gratitude and a barrio, Carmen, in Rosales town, Pangasinan, was supposedly named after her…”
A movie, titled Guerilyera was made in 1946.
References: "Carmen Rosales: The Original Superstar" by Ceres Doyo/Sunday Inquirer/ February 16, 1992; A Movie Album Quizbook by Jessie B. Garcia/2004 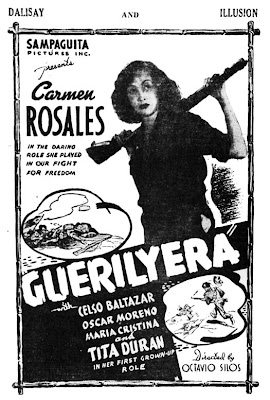 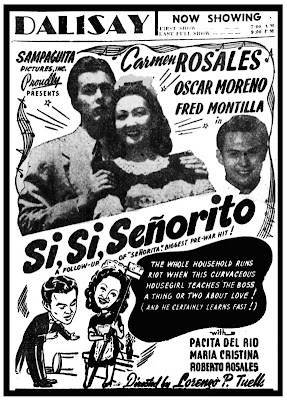 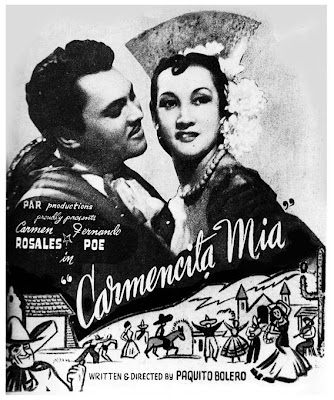 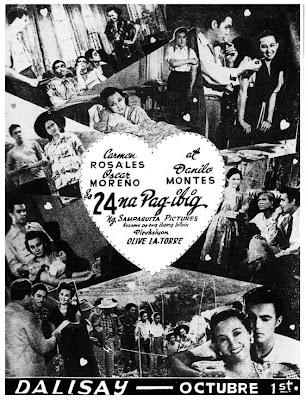 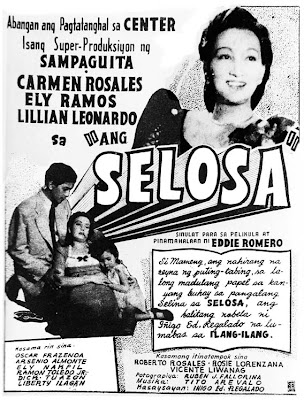 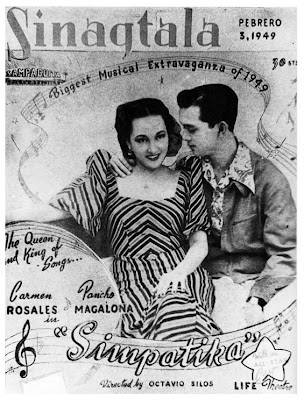 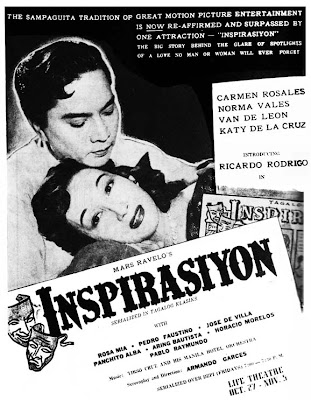 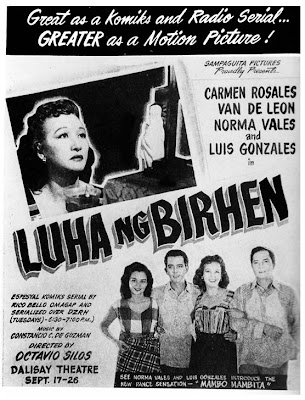 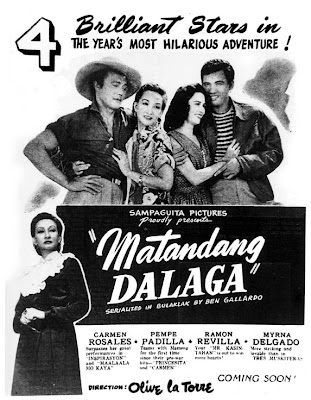 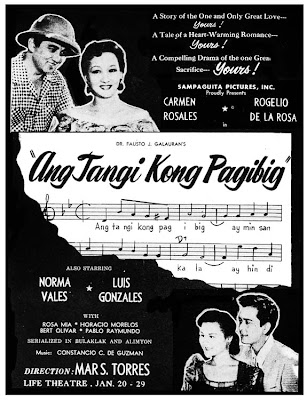 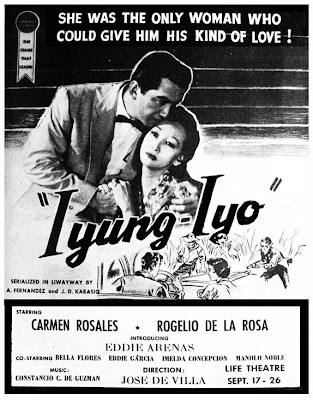 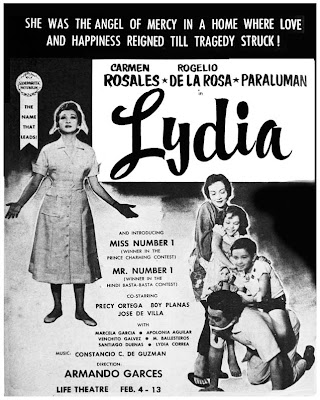 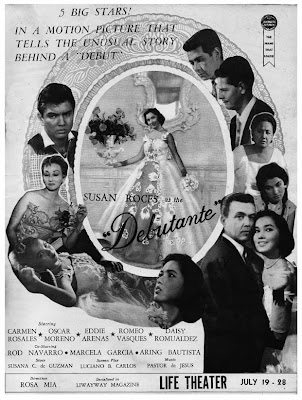 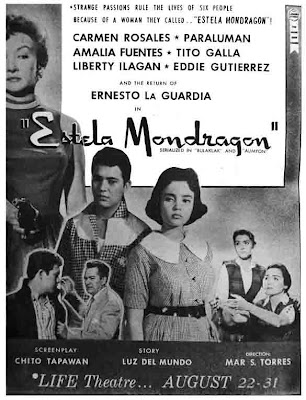 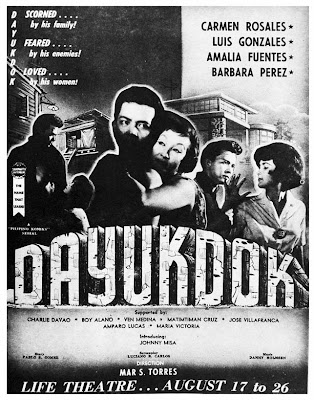 Wow. She actually made a lot of movies. What a pity that I only found one available.

Though now that you have a good list here, I could search for them and might just get lucky.

She was indeed a wonderful actress.

Does anybody have any information of her married life? To whom she was married? Her children? Thanks.

Has Carmen Rosales been married?
If so, who was he married to?
Does he have any children? Thanks.

Yes she married twice. When she started her career as actress, she was already a young widow, because her first husband who was a Navales, was killed by the Japanese. In latter part of her life, she got married to Jose “Peping” Puyat from the wealthy Puyat Clan. Brother of the late Senator Gil Puyat. He has one son with Peping named Cesar Puyat who is already dead. I personally got acquainted with his only surviving grandson from Cesar Puyat who is in his mid40’s now.