A contemporary of Komiks greats, Mars Ravelo, Nestor Redondo, Alfredo Alcala, Fred Carillo, Pablo S. Gomez and others, Jim Fernandez is one of the most popular writers-illustrators in the . He started as an illustrator in the 50s and later writing serialized komiks novels in the 70s. Two of his greatest works were Kambal sa Uma and Anak ni Zuma.

The original story of Kambal Sa Uma was created by Jim Fernandez and Ernie Santiago and was serialized in the Aliwan Komiks. It was later adapted into the silver screen in 1979 by acclaimed director Joey Gosiengfiao. It starred Rio Locsin in the dual roles of Ella and Vira. However, in the television adaptation, plays Milagros, the mother of the twins, Ella (played by Melissa Ricks) and Vira (Shaina Magdayao). Born with the physical features of a rodent, the two will be separated, when their mother tries to save them from the persecution of the townspeople. 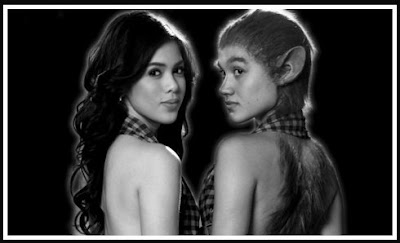 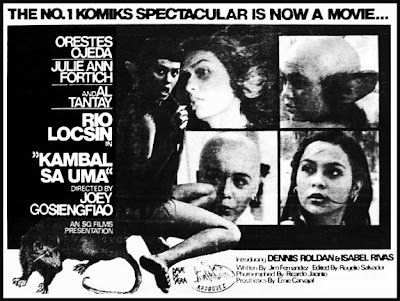 Zuma made its first appearance in a komiks novel Aztec. The character reached its peak in the 1980s with the series Anak ni Zuma. Anak ni Zuma was serialized in Aliwan Komiks from 1976 to 1984, a long series, a feat unmatched and unsurpassed and was even voted by komiks readers as the most popular komiks serial novel of the 70s and 80s. It was made into movies twice, in 1985 (Zuma) and 1987 (Anak ni Zuma).

Zuma was a demigod, and the son of the Aztec serpent god Kukulkan ("Plumed Serpent" or "Feathered Serpent"). He had a two headed snakes (one head on both ends) that rests on his shoulders. He was buried and entombed in an Aztec pyramid until he was unearthed by an archaeological expedition team. Unleashed into the modern world, Zuma went on a murderous rampage. (wikipedia) 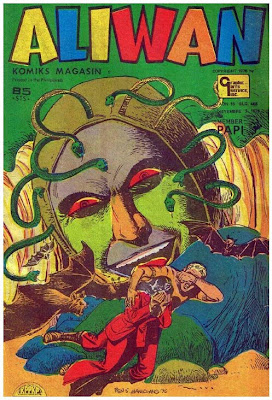 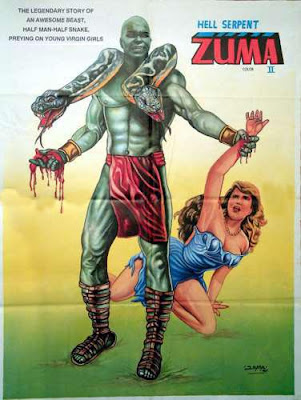 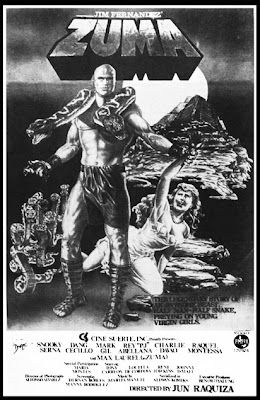 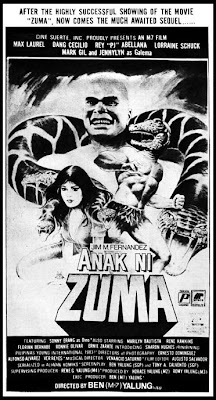 
"The Dormitory," serialized in 1971 in the Pilipino Komiks, was one of the early works of Jim Fernandez adapted to the big screen. 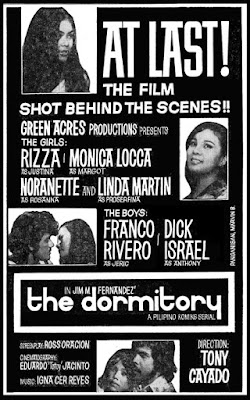 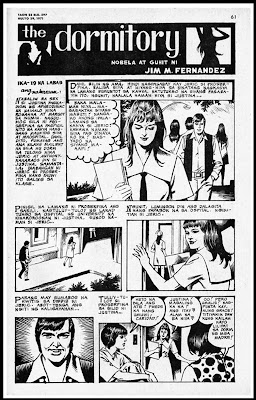 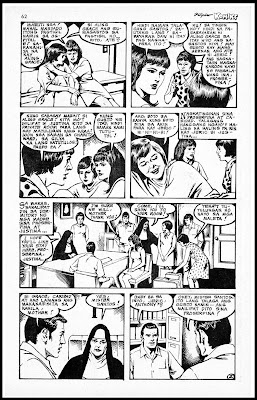 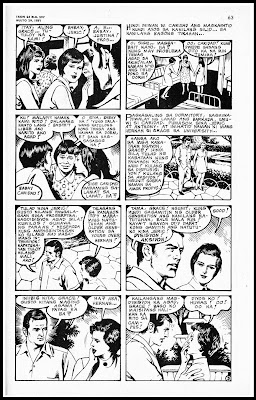 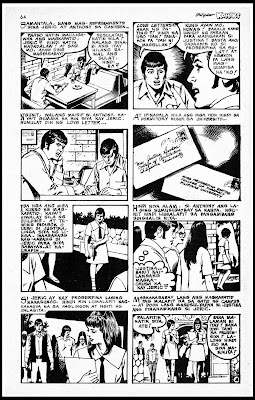 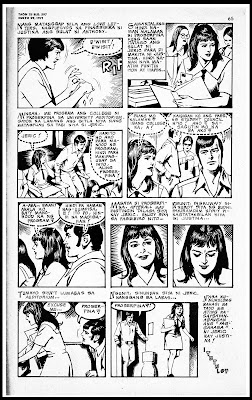 Email ThisBlogThis!Share to TwitterShare to FacebookShare to Pinterest
Labels: JIM FERNANDEZ, PINOY KOMIKS MADE INTO MOVIES

It is indeed true. Zuma was the most popular komiks series ever. It surpassed its predecessor, AZTEC where Zuma was first introduced. People were constantly talking about it just about everywhere: in schools, in parks, on buses, in jeepneys, even when you walk on the sidewalks of Manila, you'd hear snippets of people's conversations about the anti-hero.

The second most popular in those days was a Pablo S. Gomez series called TANIKALA. People were also talking about it, not as fervent as Zuma, but nevertheless Gomez' most well-read and well-loved. The movie producers raced to win Tanikala's film rights. Cine Filipino won, but instead of making the film based upon the komiks story, they decided to just use the characters' names and nothing more. Moviegoers came in droves at the film's opening day. Theaters were jampacked. And Susan Roces was superb. However, when people realized that they weren't seeing the pre-sold illustrated novel they have painstakingly followed week after week in the komiks, the audience were disgusted and in the end, this must had been Miss Roces' most unsuccessful film ever. Word of mouth spread like wild fire and after (more or less) two weeks, the showing of the film had ended.

Meanwhile, Zuma became also a very successful film. In fact, while having lunch at his house in Kamias, QC, Joey Gosiengfiao had confided to me that he was really interested to direct Zuma, and he was not kidding (I nearly choked at the dining table. He-he). I could only imagine what sort of symbolism and parallelism he could have injected in the film if he had directed it ;)

After the filming of Kambal sa Uma, we started Bedspacers. Everyday after the shoot, we would rush to Magna Tech for the dubbing of "Kambal". Yes, in those days, we were still dubbing our Tagalog films because the Arriflex cameras were so noisy, there was no chance in hell you'd understand the dialogs because of incidental noises, specially when filming outdoors.

It would have been nice if the tagalog movies and komiks these days are as successful and as popular as they were in the 1970s. Sometimes it is overwhelming to think how such huge industries as komiks and tagalog movies would collapse almost into oblivion in a wink of an eye.

By the way, thanks for the poster of Iginuhit Sa Buhangin. It is a reminder how underrated Armando de Guzman is as a film director. He really made wonderful tagalog movies and nobody seems to make noise about them.

Again, thank you for the nice film poster.

This is a story of a demigod sworn in as kong of serpents he is the son of Aztec god kukulkan the snake master devoted to ancient Aztecs long before the Spanish colonizers several years later unearthed and took on the rampage against people zuma's old foes Philip Isabel and daughter galema and others inspired fr the novel by Jim Fernandez made into 1980's live action film of the same name serialized in aliwan comics and coming soon to abs-cbn tv show in 2013-14 as a kapamilya serials.thanks! From:Wayne

He is a cool dude but he is a real Adonis of snakes move over Mightor and He-Man Zuma is coming to town!!!!thanks for the information.From:Wayne

Zuma is the real hero of the snakes and serpents of Mexico.Thanks!!Ftom:Wayne

He is the son of Lord Kukulkan god of snakes father of the hero/villain and leader of the snakes and serpents inspired from a popular novel by Jim Fernandez in 1974 formerly known as Aztec :Snake King turned into comics films television animated series action figures dolls and media and become most popular than any other superheroes also in popular culture in the Philippines. Thanks! Fr:Wayne

Zuma is cool dude a new hero is born move over Mightor and Superman a new character is coming to Manila.Thanks! From:Wayne

Zuma for President of the Philippines 2016!. Thanks! From:Wayne

Zuma the king of snakes residence in Malacanang Palace home of the Philippine presidents. Thanks! From:Wayne