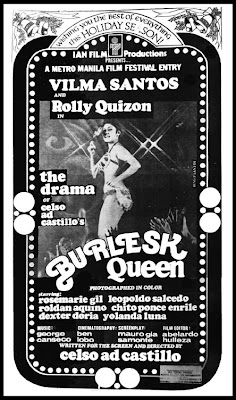 Did you know that multi-awarded actress Vilma Santos almost gave up and walked out of Burlesk Queen? Yes, Vilma almost backed out of the three-fourths finished movie when she learned about the finale sequence. No, she wouldn’t do it, she couldn’t do it. She ignored call slips and went into hiding. Poor Celso (Ad Castillo, the director), he was drowning in his own tears of desperation and banging his head against the wall. Burlesk Queen was his “last Card,” he wanted to retrieve his dwindling popularity, he wanted to save face and if he didn’t get what he wanted now, he would be finished. Finally, one day, he received a basketful of fruit--- “Peace offering,” Celso calls it, “from Vilma.” “It took us almost seven nights, shooting straight to finish that sequence. I learned the dance from an expert real-life burlesque dancer. During shootings, palaging closed door. My God, I couldn’t have done it with so many people around.” She had to take several shots of brandy before the shooting. “Otherwise I would have died from nervousness.”