Julie Vega, well-known television teen actress, died at 6:30 p.m. yesterday at the of the . She would have turned 17 years old on May 21. Julie was rushed by her parents, Drs. Julio and Pearlie Postigo, to the Lung Center 5 p.m. yesterday from the Quezon City Institute where she was under confinement for the last three days. She died of broncho-pneumonia.

Julie (real name Julie Pearlie Postigo) had a heart attack sometime last February, but this has been kept from the public and from her, especially. She just graduated from high school at the ’s College in . Julie’s major role in the TV show Anna Liza had gained wide recognition for her acting ability as a child actress.

At press time last night, Regal Film producer Lily Monteverde was reported seeing the funeral arrangements, Julie having been one of the earliest and the producer’s favorite Regal baby.
The Times Journal/
May 7, 1985 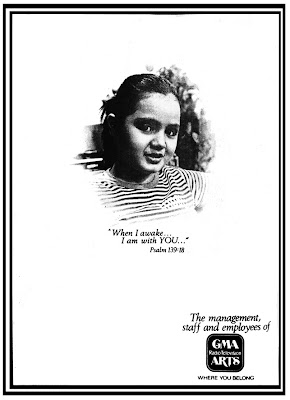 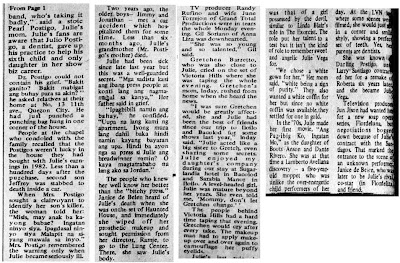 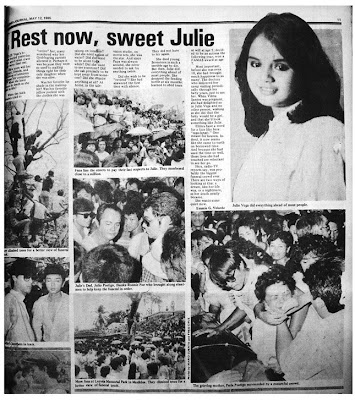 I still miss Julie after all these years.

she will always remain in my heart and mind. I love her so much

I love this girl so much since I was a little girl. She is my first ever favorite actress. Beautiful girl...good actress...good person

I miss Julie after all these years since she passed away as an idol. More than that, I used to live close to her place in 11th Avenue.

Since yesterday, i was busy searching for the name Julie Vega, (i always heard her name from my mother)but only today i have understand that it is almost 24 years since she joined our creator (and it was yesterday).

THANK YOU ATE JULIE PEARL FOR CONTRIBUTING AS A TEEN ACTRESS AND SINGER PAST 1980'S,,,, AND YOUR MEMORIES STILL REMAINS IN OUR HEARTS FOREVER.... STILL NOW 25 YEARS SINCE YOU PASSED AWAY ON EARTH,,,, WE MISSED YOU AND WE LOVED YOU......

Hello, I do not agree with the previous commentator - not so simple

I was 4 y/o when she died but I can still remember the day of her interment, there were a lot of people. Never get the chance to watch the MMK episode of her life, now Im searching over youtube all things that connects with her. She has a very beautiful face.

*sigh* I was 10 years old when Julie Vega died. I was so sad. Devastating to hear that my idol has passed away. Even went to the internment in Mt. Carmel with my mum just to bid goodbye to my ever-angelic faced idol. She was so pretty. Loved her eyes. Loved the way she acted, sung and carried herself. I just hope the new Anna Liza will be at par with the original one.

I will see one of her movies.