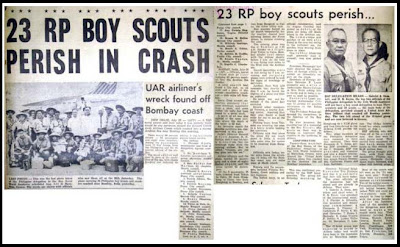 Images: top and below- From Mabuhayradio.com
I have been a Quezon City resident almost all of my life and I always passed by the Tomas Morato street and Timog Avenue area where the streets are named after the 24 boy scouts and scout officials perished in a plane crash in 1963.

The Filipino delegation was composed of 24 scouts and scouting officials (called scouters in the Philippines). The delegates composed a happy bunch when it called on then Philippine President Diosdado Macapagal on July 25, 1963, at the Malacañang Palace. During the courtesy call, a Boy Scouts of the Philippines (BSP) official, Dr. Bonifacio Lazcano, introduced the members of the delegation. Among them were the Manila Boy Scout Council's Dr. Florante L. Ojeda and Librado Fernandez, an assistant scoutmaster. Fr. Jose Ma. Martinez, SJ, a faculty member of the Ateneo de Naga, who was an assistant scoutmaster in Naga City, was the delegation's chaplain. 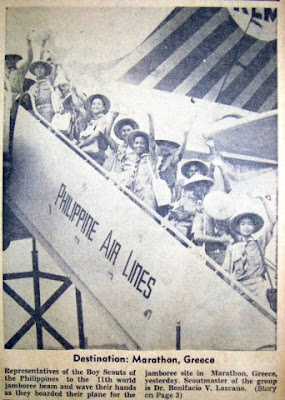 On July 28, 1963, the boy scouts were aboard an EgyptAir jetliner bound for Greece to attend the 11th World Scout Jamboree when the aircraft crashed in India.

BSP officials remembered one of the scouts, identified only “Chito,” who sent the last post card to his parents while on a stopover in Bangkok Thailand.

Rain was coming down hard, and most of the Boy Scouts had preferred to stay in the comfort of their rooms, when “Chito” sat down to write on a postcard. He did not know that it was to be his last message:

Dearest Pa, Ma, Brothers, Sister and Everybody: We arrived in Bangkok at 10:25 PM (Manila Time) safe and in good condition. We departed Hong Kong at 8:45 p.m. (Manila Time). I already sent to Pati a postcard. Please pray for me. Thank you. Love, Kisses and prayers, Chito

From Bangkok, Chito and his fellow Scouts boarded a flight bound for Bombay, India and transfer for a flight to Greece. It was their last flight on earth. Men, fishing on the sea off the town of Madh, heard the loud explosion. Morning arrived only to bring the start of search operations.

“They are so young to die.” Throughout the country, news of the disaster spread like wild fire. Shock reigned among relatives, friends, and Boy Scouts of the Philippines and the entire country.

Everybody hoped and prayed-but in vain. Misfortune carried the day. Everywhere, newspapers confirmed the great tragedy: The entire contingent to the 11th World Scout Jamboree died in a plane crash.

“He is not dead,” one mother wailed, “he promised to return. He cannot be dead.”

The Scout broke his promise: he did not return alive!

At the BSP National Headquarters, a prayer vigil was held as calls, telegrams, and cable messages in a massive display of sympathy poured in.

Luminaries of many countries, such as the head of the Roman Catholic Church, Pope Paul VI, the President of the Republic of India, Sarvepalli Radhakrishnan, the President of Indonesia, Sukarno, offered their condolences.

Expressing the bereavement of an entire nation, then President Diosdado Macapagal said:

“The Boy Scouts died in the line of duty. Their noble death shall inspire the youth and the nation.”

Amidst the sadness and suffering, the Filipinos determined to fulfill their duty to participate in the historical gathering in Europe.

On the third of August 1963, Scouts Nicasio Fernandez, Guillermo Flores and Louis Santiago left Manila as a token delegation to the Greek Jamboree.

The following day, the frigate Kripan of the Indian Navy steamed to the site of the crash in the Arabian Sea off the coast of Madh.

Indian Consul General to the Philippines K.M. Modi and Commander J.D. Cooper of the Indian Navy laid a giant wreath on the waters to honor the dead.

In Europe, in the historic plains of Marathon, at the very site of the great international event, the Chief Scout of Greece, Crown Prince Constantinos, formally opened the Eleventh World Scout Jamboree amidst the 14,000 delegates from 85 nations of the world-minus the 24 heroes from the little country in the far corner of Southeast Asia.

The Flag of the Republic of the Philippines stood at half-staff at the Sub-Camp called Antiochis, where the Filipino boys would have stayed had they made it alive to the great gathering.

Nature herself was crying and sending a somber atmosphere in sympathy at the ill fate which befell the noble Scouts of the Philippines contingent.

While the Scouts of the world – minus their Filipino brothers – came together in the ancient country of Greece, Masses and necrological services were being offered in the Philippines.

At the Rizal Memorial Stadium, Fernando E. V. Sison, president of the Boy Scouts of the Philippines, spoke to the parents and kin of the 24 Scouts and Scouters:

“My Friends, it is not given to man to bring the dead back to life. But perhaps it would be wrong or amiss for me to say here that in more than just a symbolic way, these Scouters and Scouts are not dead,” Sison said.

“They live, and shall continue to live in our midst. Their spirit of honor, of loyalty to God and country, their allegiance to the Scout Law of helping people at all times, this spirit of honor did not perish in the Arabian Sea; this spirit of honor came back to us with these mortal remains. And this spirit has entered into thousands of young hearts who look forward to their Scouting days of yesterday,” he said.

A grieving Antonio C. Delgado, father of Scout Jose Antonio Delgado, responded on behalf of the parents and relatives of the fallen Scouts and Scouters:

“For this is the other side of the coin of grief. The glory. The honor. The triumph. … In the forefront of these boys’ minds were always held as shining goals the noble ideals of the Scout Oath: ‘honor…duty…God…country! These boys kept their honor; and they kept the faith; and they gave their all for their country… and I am sure they kept themselves in the friendship of God.”

After the tragedy, the parents and relatives of the departed continued to meet and exchange stories of their young boys.

Their meetings led to the formation of the 11th World Jamboree Memorial Foundation. Memorial and markers were put up. The Ala-Ala Mausoleum was erected at Manila’s North Cemetery.

Streets in Quezon City were renamed in honor of the Scouts. The fallen Scouts and Scouters were each conferred a special Gold Medal of Honor.

At the center of Tomas Morato rose the monument of the 24 Scouts as a tribute to fallen heroes. Monuments of Scouts were also built in schools they attended like in Letran, San Sebastian and others.

Two years later, in 1965, the Maharashtra State Association of the Bharat Scouts and Guides set up a memorial tablet in honor of the twenty-four.

In July 4, the tablet was unveiled by Srimati Lakshmi Mazumdar, National Commissioner of the Bharat Scouts and Guides.

The tablet reads: “In memory of the twenty-four Boy Scouts & Scouters of the Boy Scouts of the Philippines who perished in an airplane crash over the turbulent waters of the Arabian Sea near Bombay before dawn of Sunday, July 28th 1963 on their way to the 11th Boy Scouts World Jamboree in Marathon, Greece.”

Many years later, in 1988, then President Corazon C. Aquino, Chief Scout of the Boy Scouts of the Philippines, declared the 28th of July of every year as Scout Memorial Day.

Today, years after that Black Sunday, the 24 Scouts and Scouters are not just streets, monuments or markers but are still symbols of Scouts who live by their promise to fulfill their duties. (PNA) RMA/JCA)
Sources: Mabuhayradio.com and
Bayanihan 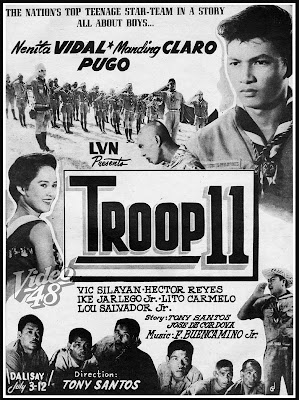 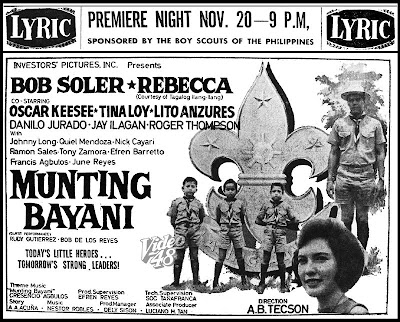 A very sad day, indeed, something which reminds me of another plane crash in 1985 with Japanese singer Kyu Sakamoto (he red=corded the hit "Sukiyaki").

All 580 or so passengers wrote messages for their families just before the plane went down.

Very touching seeing their families reading the notes found amongst the debris.

Hello, I am a fan of your blog. I live here in Dallas, Texas and I certainly enjoy looking at your posts. I reminds me of the old days. By the way, do you happen to have a copy of Munting Bayani? I was an extra in that movie and it will be interesting to see myself again. I hope to hear from you and get a quote on the price of the movie, VHS will be okay but preferably DVD. If you do please send me a message by addressing it as Koboy from Dallas. If you can give me an email address I will send you mine by by private email. Thanks.

@ Koboy from Dallas/Tondo- Sorry, don't have a copy of the movie.

I like Filipino films inspired from the life of Filipino people stories like drama comedy teenage stories western epic historical horror/scifi/fantasy military/war family/kids love stories and documentary etc in popular culture in film television and media in Philippine entertainment history. Thanks for the information. From:Wayne

They have at EBay & Amazon.com to buy classic Filipino films on DVD & Blu-ray Discs for home viewing only for the entire family. Thanks! From :Wayne

blessed evening...this story made me cry...i did not think that i could read this in detail... thank u so much for sharing...i am searching for a brief story about Scouter Antonio Limbaga of whom we have a mini amphitheater built here in our city.... Just earlier tonight me and my friends went to visit this historical place at Pasonanca here in our city... twas dark when we got there...but with our desire to have a documentation through pictures, we braved the dark... when i saw his picture, u won't believe it but i felt so different, like he is there, i don't know why, and i just salute him, a hero, so young...we are students of cultural arts and one task given to us is present a topic about a historical spot...all of our other classmates already chose their topics, and Pasonanca Park is the only place left...but then we will focus on our scouter hero.. and i found your blog...again, thank u... with due respect, please allow me to share some of ur ideas .. God bless...