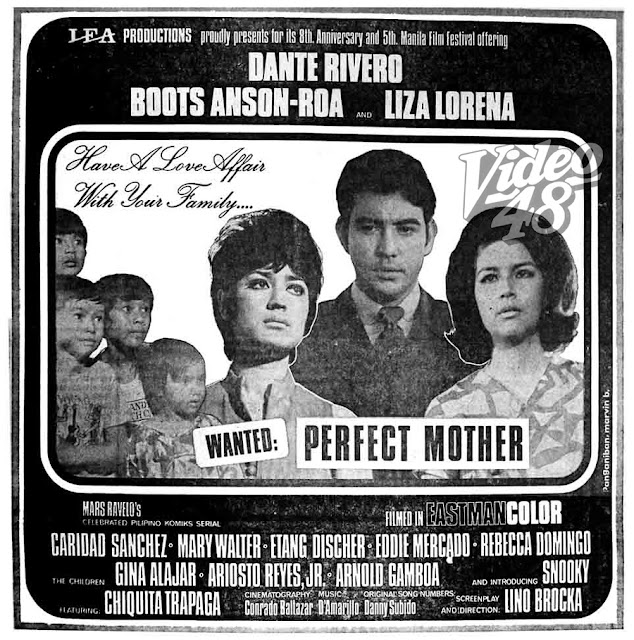 
Based on the novel by Mars Ravelo and serialized in Pilipino Komiks, Wanted: Perfect Mother is described as " light, heartwarming dramatic story for wholesome family entertainment." It tells of a couple, Dante (Dante Rivero) and Elsa (Liza Lorena) who hires a new governess, Carla (Boots Anson-Roa) to care for their four children (Gina Alajar, Ariosto Reyes, Jr., Arnold Gamboa and 4-year old Snooky, who was introduced here) . The governess quickly establishes rapport with the children--- and the husband--- creating rumors of an affair. Before things could go wrong, Carla decides to leave. Elsa dies in a car accident and the widower decides to marry again and getting a new mother to his children. Carla is the popular one among several choices, but the head servant (Caridad Sanchez) poisons the minds of the children against her. 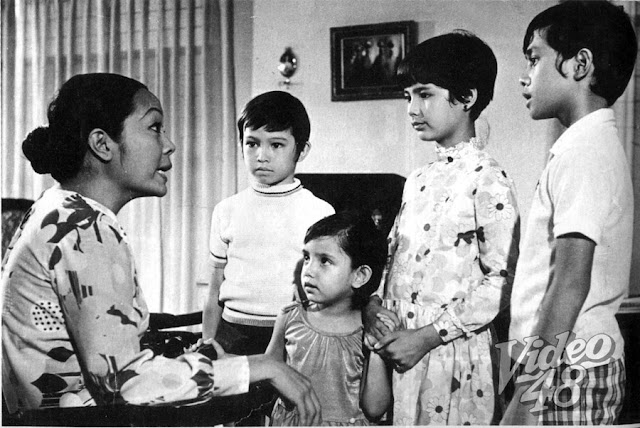 Mars Ravelo loved the SOUND OF MUSIC and WANTED PERFECT MOTHER was inspired by it.

LINO BROCKA loved the SOUND OF MUSIC as well, and when he read WANTED PERFECT MOTHER, the komiks serial gave him the idea to explore something similar to the film (and play).

MRS. EMILIA BLAS, Lea Productions' producer, was mainly a business woman, yet she gave complete artistic control to the people creating the films she produced. Though well-known for not being a spendthrift film producer (talent fee-wise), she actually didn't mind spending more (production-wise) to make the film look good. This was the reason why most Lea films were quite exceptional.

Brocka just loved everything about the Sound of Music, that later on, in 1972, he convinced Mrs. Blas to make a love story called CHERRY BLOSSOMS, starring HILDA KORONEL and Aussie NICHOLAS HAMMOND, one of the child actors in The Sound of Music (and was also the SPIDERMAN of the same titled TV series).

I can't remember now who dubbed Boots Anson Roa's singing voice in thos film, but this one showed a lot of promise and everybody noticed Brocka's capability as a film director.

Unfortunately, very few Lea Productions films were saved. Many of them were in fact the best Filipino films ever produced.

i know it's been awhile since you posted your comment, but I still want to say thanks for the kind words you have for my grandmother, Emilia Blas.

I knew her as a woman of value, character and integrity, and I truly believe these qualities really shaped how she approached production and film-making.

Not a lot of people in my generation know her or of the tremendous effort she put into Lea Productions, and so it's always nice to know that some people still remember and appreciate her contributions to the Philippine film industry.

Again, thank you and I wish you well.

The classic family movie was based from a novel by Mars Ravelo about a family man they have several children with the aid of her nanny as the caretaker of the children .directed by Lino Brocka starring Dante Rivero and Boots Anson Roa released in 1970 nearly 45 years ago.Thanks for the information.From:Wayne

Long before Careful With My Heart now comes a classic family film based from a novel by Mars Ravelo starring Dante Rivero and Boots Anson Roa a family movie for all ages released in 1970 nearly 45 years ago.Thanks.From:Wayne

I want to request the classic 1970 film inspired by Dante Rivero Boots Anson Roa & Liza Lorena directed by the late Lino Brocka released thru Lea Productions/Viva Entertainment Group from the Philippines coming soon on Youtube JDTV Dailymotion & Yahoo by 5-4-2015 coming soon. Thanks for the information. From:Wayne