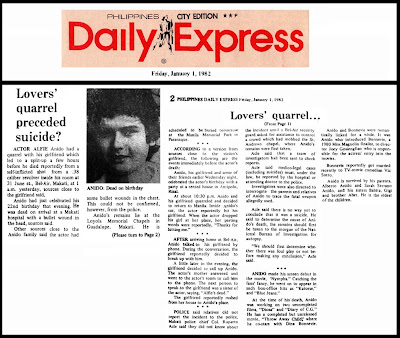 (click image to enlarge)
Lovers Quarrel Preceded Suicide?
Philippines Daily Express/ January 1, 1982
Actor Alfie Anido had a quarrel with his girlfriend which led to a split-up a few hours before he died reportedly from a self-inflicted shot from a .38 caliber revolver inside his room at 31 June street, Bel-Air, Makati, at 1 a.m. yesterday (Dec.31), sources close to his girlfriend said. Anido had just celebrated his 22nd birthday that evening. He was dead on arrival at a hospital with a bullet wound in the head, sources said.Other sources close to the Anido family said the actor had some bullet wounds in the chest. This could not be confirmed, however, from the police.According to a version from sources close to the victim’s girlfriend, the following are the events immediately before the actor’s death: Anido, his girlfriend and some of their friends earlier Wednesday (Dec.30) night, celebrated the actor’s birthday with a party at a rented house in Antipolo, Rizal. At about 10:30 p.m., Anido and his girlfriend quarreled and decided to return to . Inside Anido’s car, the actor reportedly hit his girlfriend. When the actor dropped his girl at her place, her parting words were reportedly, “Thanks for hitting me.”After arriving home at Bel-Air, Anido talked to his girlfriend by phone. During the conversation, the girlfriend reportedly decided to break up with him. A little later in the evening, the girlfriend decided to call up Anido. The actor’s mother answered and went to the actor’s room to call him to the phone. The next person to speak to the girlfriend was a sister of the actor, saying, “Alfie’s dead.” The girlfriend reportedly rushed from her house to Anido’s place.Police said relatives did not report the incident to the police. Makati police chief Col. Ruperto Acle said they did not know about the incident until a Bel-Air security guard asked for assistance to control a crowd which had mobbed the St. Andrews chapel, where Anido’s remains were first taken. Acle said that a team of investigators had been sent to check reports. He said medico-legal cases (including suicides) must, under the law, be reported by the hospital or attending doctor to the police. Investigators were also directed to interrogate the parents and relatives of Anido to trace the fatal weapon allegedly used.Acle said there is no way yet to conclude that it was a suicide. He said to determine the cause of Anido’s death, the remains should first be taken to the morgue of the National Bureau of Investigation for autopsy. “We should first determine whether there was foul play or not before making any conclusion,” Acle said. 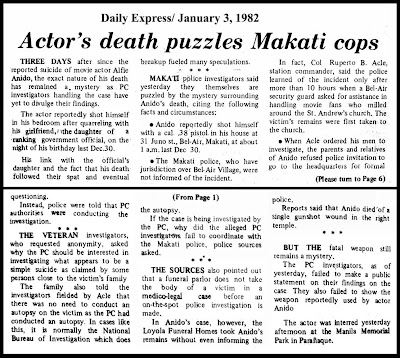 Movie actor Alfonso ‘Alfie’ Anido shot himself in the head with a .38 caliber revolver while intoxicated. This was what PC Metrocom investigators reported yesterday on the case of the 22-year old actor who 12 days ago was found dead in his bedroom with a bullet wound in his right temple. Anido, according to a five-page Metrocom report released by Maj. Gen. Prospero A. Olivas, Metrocom chief, left a suicide note addressed to his father Alberto Anido. The suicide note read: “Dad, sorry about this but I can’t take it anymore! Tell Katrina that I love you!” The Metrocom did not say what immediately caused the suicide.

The report said investigators concluded that it was suicide after appropriate examinations of Anido’s corpse, a caliber .38 Colt Diamond Buck revolver found at his bedside, the suicide note and slso after analysis of the testimonies of family members, and some medical personnel; who first attended to Anido on the night of Dec. 30. Maj. William Crespillo, head of the Metrocom Investigation Unit, said the actor was drunk at the time of the suicide. He said blood samples examined at the PC Crime Laboratory in showed a high alcohol content. Crespillo also said in his report to Olivas that a paraffin test by the NBI showed Anido positive for powder burns meaning that he had fired a gun. The PC report said he succumbed to a gunshot wound what went through his right temple and exited to the left temple. Anido’s father said that the fatal gun has been with the actor for about six months and that it was the victim’s property. 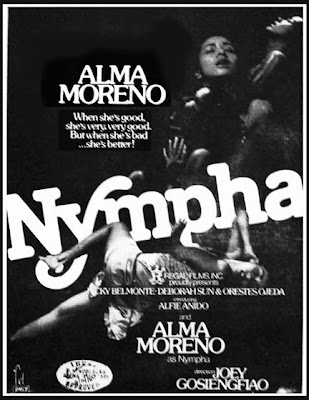 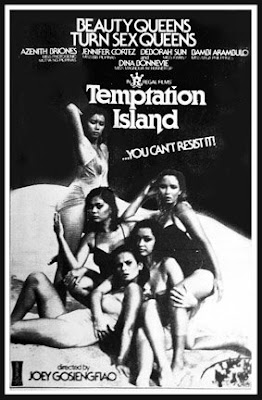 Right- Temptation Island (1980)- Stars Azenith Briones, Jennifer Cortez, Bambi Arambulo, Deborah Sun and Dina Bonnevie/with Ricky Belmonte, Alfie Anido, Tonio Gutierrez/ Directed by Joey Gosiengfiao
Alfie Anido was taking up a management course at Ateneo when he made his first screen appearance in 1980 in the movie Nympha. Catching the fans' fancy, he went on to appear in such box-office hits as Katorse and Blue Jeans. At the time of his death, Anido was working on two uncompleted films, Diosa and Diary of CG. His last completed movies were Throw Away Child and Dormitory.

Trivia: Art sometimes imitates Life--- and vice versa. Do you know that the only scene left unfilmed by Alfie Anido in Maryo J. delos Reyes “Diosa” is the ending where Alfie was supposed to put a gun on his temple and end it all? Now that Alfie is gone, Maryo is thinking of commissioning an expert to do a replica of Alfie’s face and have a double wear the face and do the scene for Alfie. (Ricardo F. Lo/ Funfare/ Jan. 82) 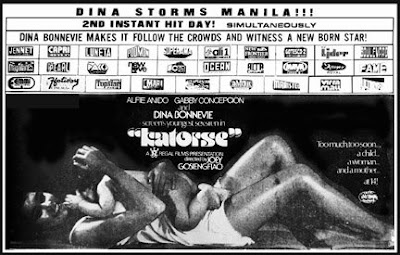 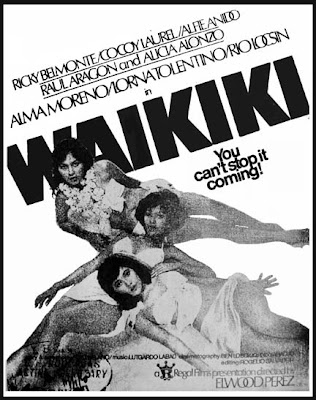 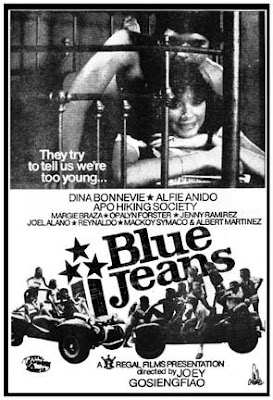 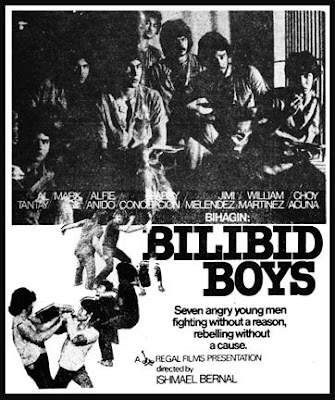 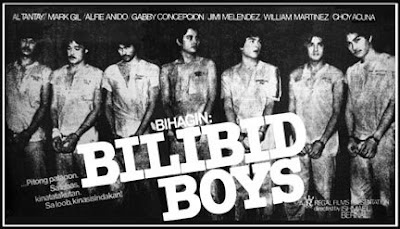 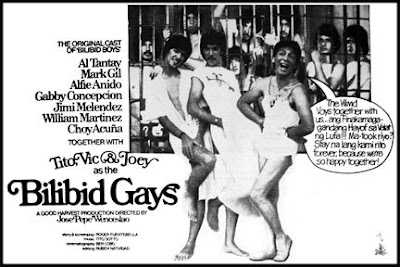 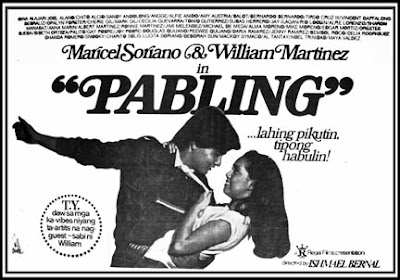 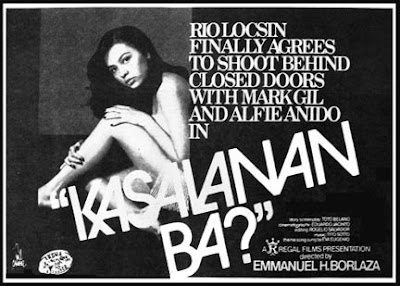 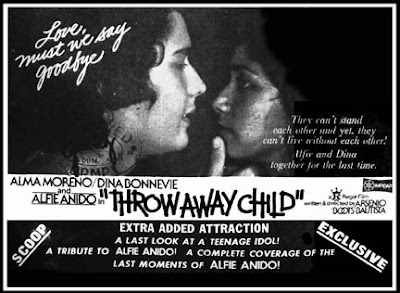 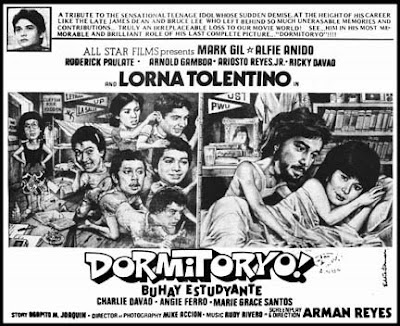 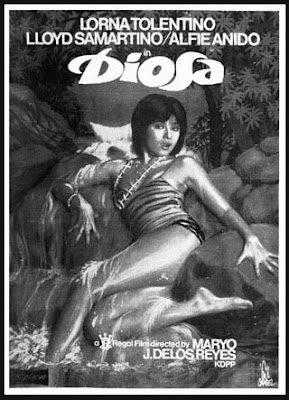 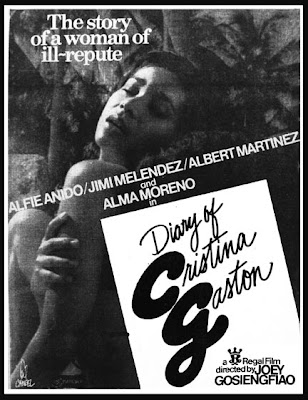 Alfie had always been "longing" to live a different life from the ones he had in showbiz. He had confided in me several times, of his desire to go back to Stanton, California - where he said he went to school as an AFS scholar in his high school days. I had always felt his deep sadness everytime we sat down and discussed life and death, a favorite topic we both passionately shared in 1981. The last time I had a chat with him was in mid-September of 1981 (I left for the USA on September 21, 1981) and we even both agreed to have a reunion in February of 1982 when he said he was thinking of going to California for a holiday.

He was one of the nicest guys I've met in RP showbiz. It still hurts to know that a person as beautiful as he was had left us too soon.

im writing something about your blog. expect a shitstorm of traffic.

btw, do you have download links to some of these movies (kasalanan ba, katorse, etc?).

Hi Mike! Thank you for the link. Sorry, don't have the download links of the movies requested.

Greetings! I am writing to let you know that I totally adore what you've gathered here. I hope to see more.

I have also placed a link to this site on my blog via post...

Thanks and great work!

Thanks Jasper! Just visited your site!

during the 80's alfie anido was my biggest idol! my whole family knows about this, i remember crying during these period, new year of 1982 was one of the saddest for me! until now, alfie's death remains a MYSTERY! i have moved on but once in a while, i still spend some time to really look for materials like these one on the internet,libraries, anywhere i can. Alfie Anido is looks and brains combined!

FYI,Alfie Anido did not commit suicide. Katrina is Jackie's sister. Jackie did him in. He did the same thing to a family friend because of rivalry over a girl in Aranga St., San Antonio Village, Makati. Jackie was driving a white Corvette during that time.

katrina and Jackie are the children of Juan Ponce Enrile. i just read this blog the other day and right now on ABS-CBN is a documentary on Enrile. the son Jack spoke about Anido's death, he said he was there but he didn't do it. talk about serendipity, Cinema One is showing Waikiki at the same hour.

Hopefully the truth will come out about his death. suicide is doubtful.

@Simon,i feel you,i know how hard it is to lose a friend.I just watched the documentary about ENRILE's.I felt sad about Alfie's fate.I am hoping the truth will actually come out soon.He is a huge lost to his family,friends and fans.

It's more than 30 years now, everyone has moved on with his death. But his life still amazes me, perhaps, because of his good looks. Very untimely death, if the rumors were true, sana tinamaan n ng karma yung gumawa nun dahil digital age na... still, i will not get tired of watching his movies... thanks for posting alfie's life on this blog...

The TRUTH will come out....it's not Marcos regime anymore...be very afraid! Cory Aquino made this country a democratic.whoever is respnsible for Alfie's death YOU WILL PAY?

I was born early 80's, until now im still watching and searching for alfie anido's movies, he is my ideal kind of man, looks and brains all in one, so sad he has to go so early, i admire him so much... I am now 35yo, i still like him... Til now.

He is the popular actor/commercial model and endorser in several films of the 1980's Regal film stars like Albert Martinez William Martinez Snooky Serna and Maricel Soriano died due to circumstances commited suicide in 1981 at the age of 22 born in Calamba Laguna died in Iba Zambales(1959-81)R. I. P. Thanks!
From:Wayne

I remember this night. I was calling his father Alberto but the phone was just kept on ringing and ringing. Yun pala they were busy na at the hospital and the morgue. Then I learned nasa Loyola Memorial Chapel na sa Guadalupe.

How sad. Hoping for the justice that he so much to deserve

I saw the pic of his tomb in the facebook. Was thinking if he's still there or not because its looks like neglected and if his family was still able to visit him after all this years.