Julie Vega was only 10 years old when she was launched to full stardom in the 1978 movie, "Mga Mata ni Angelita." She appeared in previous movie outings as Darling Postigo. The young Vega was ably supported by an all super star cast headed by the King of Philippine Movies, Fernando Poe, Jr. (in the role of Conrado, the ex-convict) and Comedy King Dolphy (as Tacio, the taho vendor). Also appearing in cameo roles were Joseph Estrada (as himself as Mayor); Nora Aunor (a metro-aide sweeper); Vilma Santos ( as a worried wife); Ramon Revilla (as barrio captain); Alma Moreno (as a jealous sweetheart); Christopher de Leon (as the lover) and many more. 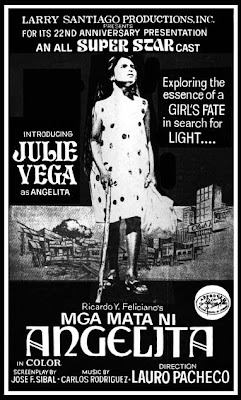 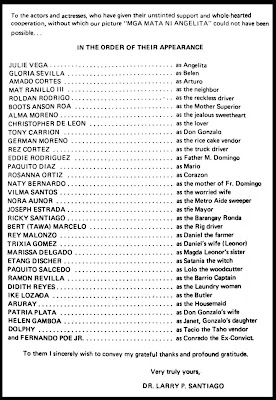 hope you have a poster of milagro sa porta vaga...and her earlier works too.

She is the child actress of the late 1970's & early 1980's star in several films television & media played as Annaliza the first GMA television drama run from 1979-85 series until
his death in 1985 in popular culture in films television comics & media in Philippine history inspired from the radio drama serial from 1974 to 1978 turned into a live action film nearly 37 years ago. Thanks for the information. From:Wayne

I missed her nearly 30 years ago former child actress Julie Vega is a good talented young star her death anniversary nearly three decades ago her legacy lives again. Thanks for the information. From:Wayne

Originally retitled The Eyes of Anghelita by the foreign press based from the radio serial & comicbook stories turned into a live action film inspired by actress Julie Vega became popular among Filipinos in popular culture in film television & media in Philippine history. Thanks for the information. From:Wayne waynemoises@gmail.com

Story created by Ricardo V Feliciano from the graphic novel about the homeless blind girl travels around places in search for her long lost mother & reunited inspiration from Julie Vega role turned into a film from 1978 & still popular among Filipinos was serialized in radio comics & television series. Thanks for the information. From:Wayne waynemoises@gmail.com